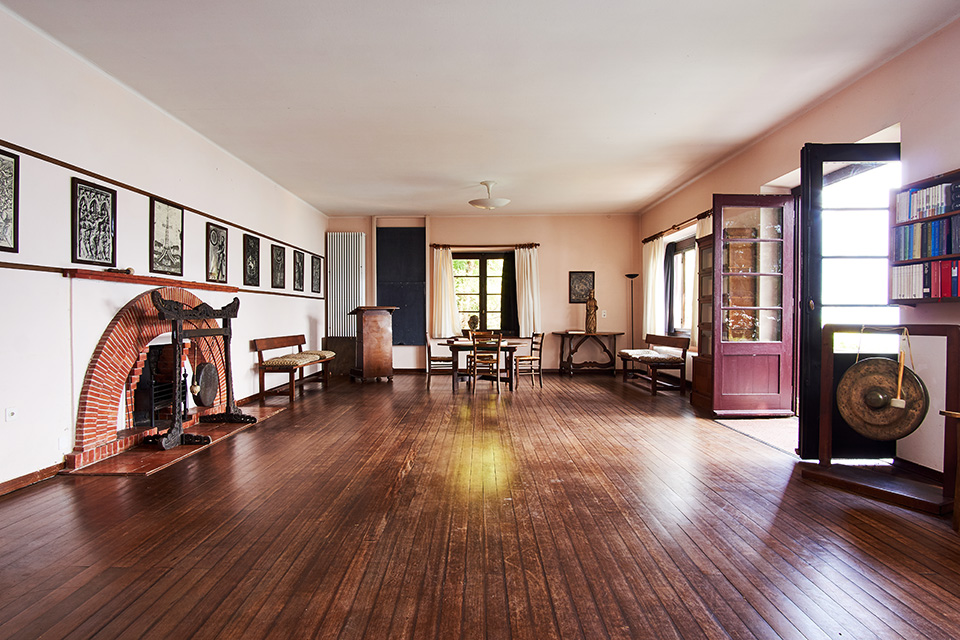 Eranos was a project of Olga-Fröbe Kapteyn’s (1881–1962), which came into being on the banks of Lake Maggiore at Ascona–Moscia. As its name reflects, eranos (Gr. “banquet”) was a place and occasion where contributions were liberally offered at the table by attendees. Its goals were to create a “place of encounter and experience” and a “free space for the spirit”, where Eastern and Western thought could meet. Eranos modeled the annual international interdisciplinary Conference (Eranos Tagung) with traces of Italian Renaissance style, the intellectual circles of German Romanticism, and the great salons of Europe in the 1800’s. Eranos began with an ambitious program of annual Conferences held at Casa Eranos. Originally, each Conference lasted about ten days, typically during the second half of August or at the beginning of September. The lectures, which lasted about two hours, were given by the speakers in their mother tongue, without translation. An ancient gong, played with a slow and severe cadence, attracted speakers and the public for the beginning, the suspension, or the resumption of the speeches. Since the 1940s, the “formal” part of the Conference was complemented by “informal” discussions, reserved for a smaller group of speakers and a few other guests, on the terrace of Casa Gabriella. The group gathered around a large Round Table under two tall cedar trees facing the Lake Maggiore. A stone sculpture with the inscription, genio loci ignoto (“to the unknown genius of the place”), stood in the background.

Olga Fröbe-Kapteyn was born in London to Dutch parents, from a culturally rich background, on October 19, 1881. Her mother, Geertruida (Truus) Agneta Kapteyn-Muysken (1855–1920), was involved in feminist movements and social renewal, while her father, Albertus Philippus Kapteyn (o Kapteijn, 1848–1927), was an engineer with a passion for photography. Since 1900, she lived in Zurich, where she studied at the School of Applied Arts and then at the University of Zurich. In 1909, she married the flautist and orchestra conductor, Iwan Fröbe (1880–1915), with whom she lived in Berlin and then, from 1914, in Zurich again. She was widowed by Iwan Fröbe in 1915, due to an airplane accident. In 1919–1920, together with her daughter, Bettina Gertrude (born in 1915), she moved to the South of Switzerland to for undergoing some natural treatments at the “Mountain of Truth” (Monte Verità) Sanatorium in Ascona. In 1920, she settled down in the charming Casa Gabriella in Ascona-Moscia, on the shores of Lake Maggiore. It was there that, during a long period of solitude, she became familiar with oriental philosophies, meditation, and depth psychology.

Her first profound contact with symbolism was thanks to a poet and mystic from Munich, Ludwig Derleth (1870–1948), who in the 1920s had a considerable influence both on her and on the birth of Eranos. In 1928, she built a lecture hall near her Casa Gabriella. It was called, Casa Eranos, and was used as “a place of encounter and experience,” where Eastern and Western philosophies could meet and dialogue. The name, “Eranos,” was suggested to her by Rudolf Otto (1869–1937). He was an eminent historian of religion and author of several important studies of the phenomenological analysis of the religious experience, such as The Holy (1917) and Mysticism East and West: A Comparative Analysis of the Nature of Mysticism (1926). Otto led Eranos encounter a human-centered conception of religiosity. Sinologist Richard Wilhelm (1873–1930), who presented his translation of the ancient oracular Chinese text, the I Ching, in 1923, was another important influence. His work marked a turning point in the academic interpretation of the religious testimonies of extra-European cultures: no longer merely ethnological material, but expressions of subjectivity endowed with their own existential and spiritual reality. Of course, Swiss psychologist, Carl Gustav Jung (1875–1961) was decisive. Olga Fröbe-Kapteyn met Jung for the first time at the the “School of Wisdom” (Schule der Weisheit), run in Darmstadt by Count Hermann Keyserling (1880–1946), where she found a group of researchers devoted to finding the “common root of all religions” and encountered Wilhelm’s edition of I Ching for the first time. Thanks to Jung, the Eranos Conferences provided considerable insights into the study of archetypes. Since then, Eranos has always had a particular interest in those central features of the psychic life, whose “archaic” and “primitive” aspects retained their features despite the evolutionary processes that have taken place.

In 1933, Olga Fröbe-Kapteyn founded there the Eranos Conferences, which attracted some of the most influential scholars of the twentieth century. In the following years, she focused on further enriching the Conferences, which were becoming like a “ritual”, a “dance”, which started anew each year, but always with different “dancers”. From the mid-1930s, initially at Jung’s request, Olga Fröbe-Kapteyn also traveled to European and American libraries—in London, Paris, Rome, Munich, Zurich, Athens, Stuttgart, Oxford, Crete, Berlin, Bonn, Trier, and New York, among others—in order to pick-up symbolical images. She thus formed a rich archive, which became very important for the research of many scholars. The Eranos Archive is now part of the collections of the Warburg Institute (University of London). Olga Fröbe-Kapteyn edited the first thirty Eranos Yearbooks (1933–1961) and dedicated all her life to nurture her cultural enterprise. She passed away in Casa Gabriella on April 25, 1962

The Conferences of the first phase (1933–37) were characterized by a comparative phenomenological approach to Eastern and Western spiritual traditions, featuring topics such as "Yoga and Meditation in East and West", "Eastern-Western Symbolism and Soul-Guidance", and "The Shaping of the Redemption Idea in East and West". The Conferences of the second phase (1938–46) were increasingly influenced by Jung’s work. These meetings brought the perspective of comparative phenomenology to individual archetypal topics, once again in Eastern and Western spiritual traditions. The proceedings coming out of those conferences comprise authentic thematic dossiers (e.g., "The Form and Cult of the Great Mother", "The Symbolism of Rebirth", "The Hermetic Principle", "The Spirit"). The conferences of the third phase (1947–62) revolved around an ambitious program of cultural anthropology focused on the basis of the “inner man” ("innere Mensch") developed by Erich Neumann. These meetings featured topics such as "Man and Rite", "Man and Time", and "Man and Energy". Conferences of the fourth phase (1963–71) explored cultural anthropology more deeply through examination of the phases and transformations of life with topics such as "The Polarity of Life", "Sense and the Changes in the Image of Man", and "The Stages of Life in the Creative Process". Conferences of the fifth phase (1972–88) discussed symbolic hermeneutics and featured topics such as "Thought and Mythic Images", "The Play of Gods and Men", and "Material and Imaginal Bodies". The sixth phase Conferences (1989–2002) drew from diverse perspectives with the purpose of bringing archetypal psychology and the ancient Chinese oral text, the I Ching, onto the common ground of the imaginal (e.g., "The Shadow of Perfection", "Gateways to Identity", "Chroniclers and Shamans", and "The Magic of the Tortoise"). Seventh phase Conferences (2006 to the present) have explored the relationship between the individual and society and sought to create a dialogue surrounding great issues that human cultures face, the problematic obstacles that thread contemporary cultures, and the knotty problems that grip the world today (e.g., "The Modernities of East and West", "Care of the World and Care of the Self", and "Where is the World Going? The Uncertain Future, between Traditional Knowledge and Scientific Thought").

For a long time, Eranos was the sole venue for gathering experts and lay people who were inspired by different cultural and spiritual interests and unfettered by their fields of specialization. At Eranos, people were free to discuss the results of their research. As the only European conference center to remain active during World War II, Eranos has made an extraordinary contribution to European intellectual history.

It has long been the custom that each speaker at Eranos donates the text of his or her talk in exchange for the hospitality that the Foundation provided. This has resulted in the collection of over seven hundred articles published in over seventy Eranos Yearbooks (Eranos-Jahrbücher). This provides evidence of exceptional research work in the most diverse fields of knowledge, and the custom continues to this day. The spirit that has led, with extraordinary regularity and continuity, lecturers and listeners to meet and find each other in Eranos is well testified by the image of the great planisphere that Daniel Brody, the first publisher of the Yearbooks, hung on the wall of the Rhein-Verlag publishing house in Zurich in 1952, to celebrate the 20th anniversary of the editorial series. The map was marked with multicolor lines, each representing the place of origin of participants, and all converging at an almost invisible point on the map—Ascona. The greatness of Eranos is encapsulated in this image. It would have been wrong to think that, in those curves, we could find aerial routes or roads with a lot of traffic; they did not indicate any of this. As Henry Corbin explains, they only indicated the path of each of them, lecturers and listeners, from the different points of the world, towards the center that brought them together. The result was the convergence of unique personalities with vastly broad knowledge who engaged in face-to-face dialogue free from any academic or dogmatic agenda. The Eranos Yearbooks and other publications can be bought through the Foundation, libraries, and the publishers.

As its founding, Eranos’ activities were planned and coordinated by Olga Fröbe-Kapteyn. She was accompanied by the “Eranos Circle” (Eranos-Kreis) or “Eranos Community” (Eranos-Gemeinschaft), a small group of scholars “of variable geometry,” who were attracted by C. G. Jung. These individuals were responsible for suggesting names of potential conference speakers to Olga Fröbe-Kapteyn. The tradition (which continues today) was that successive conference topics were not dictated, but rather emerged organically at the end of the ongoing conference. The given topic was one that made the strongest points in the most significant arguments during the work sessions. At a certain point, a particular issue would be raised and would call out as a candidate for the following year’s Conference.

In the Spring of 1943, Olga Fröbe-Kapteyn transformed Eranos into a legally recognized Foundation that could qualify for public and private funding. Thanks to Jung’s intervention, the new foundation obtained the support of the Swiss Federal Institute of Technology (ETH), Zurich, from 1936 to 1956 and of the Pro Helvetia Foundation, which contributed to financing from 1943. Once again, thanks to Jung, the Bollingen Foundation placed Eranos within its Program of Contributions to Institutions (General Humanities) beginning with 1947. The Board of the “first” Eranos Foundation, which remained active until 1955, was composed of Adolf Portmann (1897–1982; Professor of Biology and Zoology at the University of Basel and later Rector Magnificus of the same University), Tadeus Reichstein (1897–1996; Professor at the Institute of Organic Chemistry, University of Basel and 1950 co-winner of the Nobel Prize in Physiology or Medicine – along with Edward Calvin Kendall (1886-1972) and Philip Showalter Hench (1896-1965) – for the discovery of cortisone), Hans Conrad Bänziger (1895–1956; a renowned Zurich psychiatrist), and Walter Keller-Staub (a well-known Zurich lawyer).